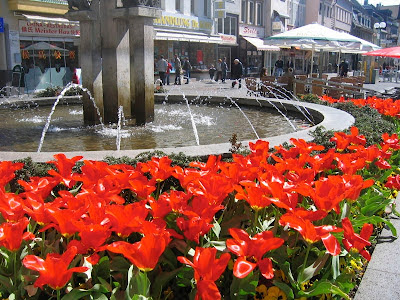 I love Spring. Yellow Daffodils, sweet purple Hyacinth, orange and red Tulips. New color and the promise of new life after long winter snows. And Easter. The reminder of the amazing truth - the uncrushable hope - that Jesus is alive! The knowledge that the cross was not the beginning nor was it the devastating end.

Hope formed the tiny frame of a baby on earth in a stable in Bethlehem, it reached the depths of despair and darkness on a hill of Golgatha, but it burst forth in glorious joy on the morning Jesus resurrected from the tomb, and that hope continues as He is alive in heaven preparing a place for those who believe Him.

Easter causes me to reflect on many of the great hymns of the faith that I learned as a child. Hymns I want my children to know, to learn the words that bring faith, hymns that share hope.  We have this wonderful book called Passion Hymns for a Kids Heart.  We listen to 1 hymn on my iPad at breakfast and talk about it while we eat. It leads into all kinds of discussion.

I should tell you that my son with FASD has a passion for music: music fills his soul, it flows from his heart non-stop to the extent that if he is awake, he is singing or humming with every breath.  After listening to this hymn, my sweet boy began his two hundred and one-question inquiry. Which led me to breaking the song down into sections and explaining them to him.


On a hill far away....
son: where is Jerusalem mom? how far away, like to Grandmas?

Stood an old rugged cross...
son: I know this mom, its where Jesus was killed

The emblem of suffering and shame...
This took some careful explaining on my part but he's a boy so all that killing and blood stuff peaks his interest and I truthfully told him it was the horrible way that the mean soldiers in Rome would kill the Christians and the prisoner that they didn't like. That it was very painful and very embarrassing because they took all your clothes away and left a person naked before hurting them. (snickers on his part, yes he's all boy and the word "naked" sends him into gales of laughter!)

For twas on that old cross...
same cross from long ago

That the dearest and best...
that's Jesus, the Son of God, He is the one who is the best

For a world of lost sinners was slain...
thats everybody, even you and me.  Jesus loved us all that much.

So I'll cherish the Old Rugged Cross...
that means I'll think of it nicely and be thankful for what happened on the cross

Till my sufferings at last I lay down..
Son: what kind of sufferings mom?

Just here my voice broke..., and I could only speak in a whisper to him as my emotions overwhelmed me with what the Truth of the cross really means for him and every child like him with disabilities. I was supposed to be helping him understand when suddenly my heart was once again growing and learning new insights because of the special needs of this child.
“Sufferings”, I explained, are all the sad things we have to go through in life.
Like your fetal alcohol.
It's something you'll always have here on earth.
I wish it would go away but it won't.
And friends who get sick, and people who get hurt, and earthquakes that happen...those are all "sufferings".

I will cling to the Old Rugged Cross....
In a whispered still voice I said to him, "Oh dear boy, the cross will always be your hope. That old cross where Jesus had to die, it is your hope, for today, for tomorrow, for everything"

And exchange it someday for a crown ....
My little angel on earth, you have to suffer with all the affects of fetal alcohol on this earth and its not your fault, and I can't fix it.

But one day God has promised that you will take that Fetal Alcohol and you will throw it down and get rid of it.

And God promises you that He will give you a crown in heaven. A big, beautiful crown, shiny-er and more sparkly than anything you ever seen. And you will get to wear that crown forever and ever and ever because you are Gods precious child and He loves you. 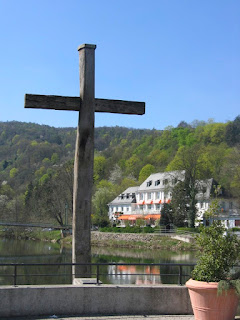 That my friends, is the hope found in Easter.
Posted by Unknown at 12:14 AM 2 comments: