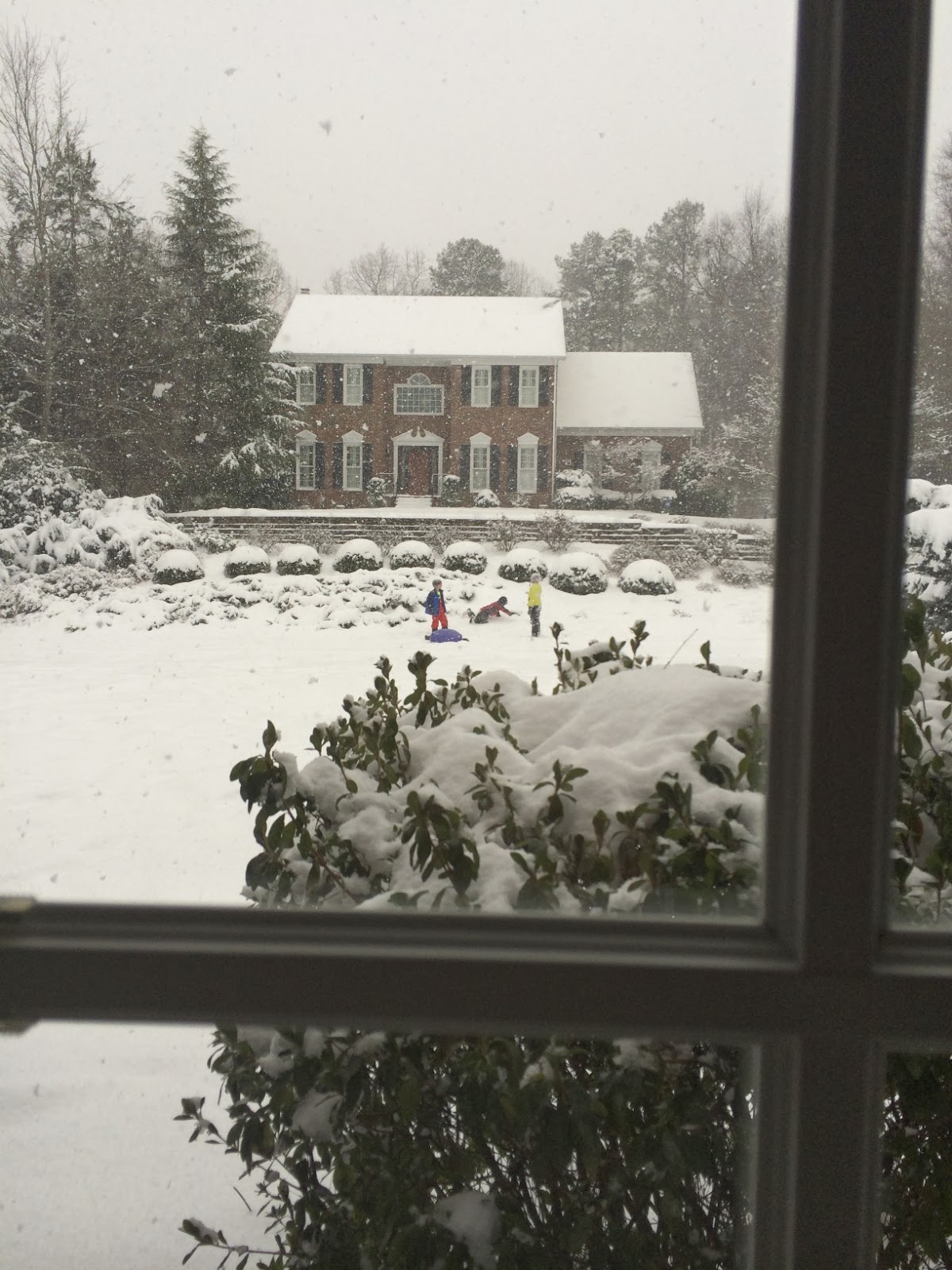 I watch from my window as the snow falls. Last winter, this snow was a normal, weekly occurrence in our lives; this year we are living thousands of miles away, in a land that rarely sees snow, and has now declared a state of emergency (no, literally, they have!) because there is almost 4 inches of snow.  Now the neighborhood kids have gathered in our cul-de-sac, right across from our house, the location of the steepest driveway, now turned sledding hill.

Some of the boys walked by and my son, Snow Boy, like most tween boys, thought it would be fun to throw a snowball --  after all, eating snow & throwing snow are his most favorite winter sports! The other boys threw back. Snow Boy threw again, but managed to splatter ice into one of the younger boys eye. Unintentionally. The neighbor boy cried. Hysterically cried.

Snow Boy threw more at the other kids, even though they said stop. They told him to go away. He laughed and ran right into the midst of them. The little boy went across the street to tell his mom - which, of course, triggered the reaction in Snow Boy that it was now time to flee.

I hear my son yelling "cry baby" and "you liar, you said you'd play".  I go out to calm him, and try to explain to the other boys that when you ask him to play, he is going to play. Continually play. He will not stop just because you say stop; you may be tired, but he is just getting into it.

In the meantime, my Snow Boy continues screaming to the other kids, "you lied! you lied! you said you'd play! you're a cry baby." I firmly tell him while giving him the mommy-evil-eye, "shut your mouth now and walk away”.  I make sure the other boy is ok; the neighbor mom comes out and say's ..."its fine, it happens in the snow, just be careful when you throw snow." She is not upset. The neighbor has no visible evidence of injury on his face.

I take my Snow Boy inside. He has melted into tears. I sit across the table from my son, trying to be patient, trying to help him calm his body, attempting to have a rational discussion, trying to grasp for the words that will make a connection with him. He sits there with eyes red, a blotchy, puffy face swollen from tears mingled with a runny nose, hiccuping as he tries to tell me about it.

What do you do when you realize your kid has been labeled by the other kids as the neighborhood bully?

I talk. He cries.

He talks. I listen.

My heart aches for him.

I see the intense pain in his eyes, as he truly does not understand why the kids are angry at him. He truly doesn't know why they won't play with him. I gently try to be honest and point out to him the difference in his actions and theirs. It’s not making a connection with him.  He just wants to play; he longs for a friend.

This boy. This FASD. This enigma. My soul pleads for answers, for breakthroughs in communication. I want to scream to the world: My son is not mean! My son is not an angry boy! My son is most definitely not a bully!

They don't see through his eyes.

Through his eyes: he whacked because you all had light-sabers (sticks) and he wanted one too...only his pain tolerance is incredibly high, so getting whacked with a stick is all part of the game if you want to be a Jedi...in his eyes.

Through his eyes: he called you a name because you said something off handed in sarcasm or a joke. He only thinks in black and white, in the present, in his eyes.

Through his eyes: you had the football and it was his job as the defense to do whatever it takes to get the ball to his team....even if that is taking you down. It doesn't matter that this is Nerf football and you are 4 years younger than him.

What I see in his eyes as I sit across the table is a tender-hearted little boy in the body of a tween, who feels alone and ostracized from everyone else. I see a child who doesn't understand why all the kids, of all ages, want to play with his younger sibling, but not with him. I see rejection and confusion.  And I want to shelter and protect.

I sigh again. I plead silently for words to comfort and ease his pain.

I open my arms and hold him on my lap, rocking with him in a warm embrace.  It is enough to help him through this moment. It is enough grace for now. Still, I pray without ceasing that someday others will see through his eyes.
Posted by Unknown at 11:48 AM No comments: