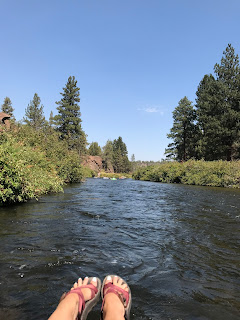 This summer finds me floating through a new door. Not one of my choosing, but one that opened and pulls me through.

Grab a cup of coffee and I’ll fill you in:

It all started with a phone call in July when I heard the words, “it’s just a routine procedure, but your mammogram showed some areas of concern and we’d like to take another set of views, it's probably nothing”.

So July 17th,  once again, I subjected my ta-ta’s to being placed in a vice, twisted and squeezed until I could barely breathe, when the girl so sweetly says “take a deep breath and don’t move”.   Umm, sure, did you notice you’re smashing my ta-ta’s in a press...where exactly did you think I was going? Then I get to breathe for 30 seconds while they turn the machine to find a new, unbelievably awkward position in which to flatten me. Again.

But it’s really the “wait here while we have a doctor read these” comment that sends the warning bells blaring in my head and causes my stomach to drop.  The pathologist returns and informs me that it would be beneficial to have a streotactic biopsy, soon.  (Okay, she said much more than that but my mind was a bit blurred.)

In the meantime, I met with an Orthopedic Doctor because I have a partial thickness tear of my rotator cuff.  Three days after the steroid shot and percutaneous needle treatment has taken effect on my left side, allowing me to increase my range of motion, I head back to the radiologist office on August 4th, for my right ta-ta to once again be the star attraction.

Let’s just say that this is not a procedure you want to have. Maybe it was just my lucky Friday, but the doctor was nice enough to apologize for the twisting, vice gripping, and steam rolling that was apparently necessary to insert needles into my right ta-ta... and reward me a generous $5 Starbucks gift card.

Three days later, the pathologist said I need to see a breast surgeon, and she referred me to a specialist....who had an opening Sept 18th.

I thought, well, that must mean it’s not too big of a deal if they are fine with me waiting another month.  However, my doctor called the next day, using the “C” word for the first time and said she wanted me to go see someone immediately and not wait until September.  And just like that, on August 10th, I found myself sitting in a waiting room with my husband.

Now two days may not seem long, but for me it was 48 hours of unknown anxiety and nerves, because life with Boy Wonder doesn’t stop. Ever. He keeps going & going & going. Xanax was my lifeline to keep calm in front of my boys and help me sleep at night. One shouldn't just drop the “C” word to a patient and have them wait 48 hours.

We meet this doctor (who was not the one we wanted) who had an available schedule. He went over everything. Yet what I remember most was having a panic attack - - in a doctors office - - a full blown panic attack and overwhelming feeling like I couldn’t breathe. After 15 minutes of talking to us about A-typical cells and invasive ductal carcinoma and lumpectomies and mastectomies and genetic testing and radiation treatments and the need to reduce stress in my life...he paused to ask if we had any questions?
Ummm. Blank stare.
Momentary silence.
Yeah, probably a million of them, but I have no idea where to begin because this isn’t really happening to me, is it?

At this moment, I was so thankful for my handsome Prince being by my side, looking a bit dazed like me, but asking rational, calm questions.  I left feeling overwhelmed, scared, and uncomfortable with this doctor.  We got to the parking lot and I let the dam of emotions burst to my man with a cry of “how do I do this and handle Boy Wonder?”.

That afternoon I asked a few amazing women to pray that we would get in to see the other doctor for a second opinion.  I found myself needing to take a Xanax every 8 hours. My stomach was so upset and anxious, I could hardly eat.

Monday, August 14th, Dr. H’s office called to say they have an opening on the 16th. This was the first stone of remembrance I began to build on.

Dr. H took over 2 hours to go over everything with us using graphs and handouts and printed materials. He explained every detail and the ‘what if’s’, paused for us to comment, then patiently explained more. We walked out of his office knowing he was a definite God-send to us, and we were in good hands. He set up an MRI early the very next morning.

August 17th I walk into radiology, where the receptionist and I are now on a first name basis, having had a mammogram, a shoulder x-ray, a shoulder MRI, a second mammogram, a sterotatic biopsy and now a breast MRI.  My ta-tas and I rejoiced that this procedure simply involved lying on a table, taking a Xanax, and being slid into a noisy, claustrophobic tomb. No poking, prodding or vice grips were present.

I left the MRI, and headed for genetic testing to see if I carry the BRCA 1 or 2 gene.

That evening the amazing Dr. H called me before leaving on vacation to tell me the MRI found a tumor all the other tests had missed.   Another stone of remembrance is placed. The fingerprints of God are showing up on this journey.

August 24th I open this door with deep breathes, with clouded eyes and silent prayers. 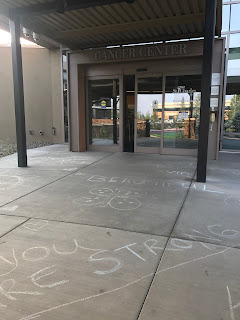 This passageway leads me to Dr. O, my oncology radiologist, who I come to view as one amazing doctor.  Compassionate, concise, thorough and funny. They are calling it Stage 2A breast cancer.  I place another stone of remembrance, and praise God for his guidance in all this.

These are days of testing and waiting.
Waiting in itself has become a test.
There will be more to share on this journey as I watch the stones of remembrance grow, as I learn how I am ever going to handle this while living with Boy Wonders unique needs, and how God will make Himself real to us.

I am on the other side of the door. Walk with me.
Posted by Unknown at 5:23 PM